Nerding Out on Soil : Why You Should Give a Schist Soil plays a massive role in the way a final wine tastes. It may seem insignificant, but the composition and texture of the dirt in which vines grow play a serious part in what is translated to the bottle. Breaking down the subject, its effects on wine, and the countless types of soil that exist worldwide can be a beast of a subject, though one thing’s for sure: you should definitely give a *schist.* Here’s why.

Why is soil important to wine?

As with any other plants, soil is important to vines because it sustains their life. Soil is the primary source of food and water for vines, which help nourish the future fruit destined for vinification. Soils also modulate climatic influences on vines: temperature, rainfall, and more. For example, soils can retain heat and release it back to plants at night, which is crucial in cooler climate areas. Soil also plays a role in dictating water levels within vineyards. Although rainfall is obviously a factor, soil determines the amount of water drained and retained within the earth.

Soil also provides basic nutrients (carbon, oxygen, and other elements) to vines. Over time, weathered soils dissolve these nutrients (in the humus) and continue to enrich vines, which allow growers to cultivate the same crops year after year. Even viticulture’s most rocky and ‘dirt-free’ appearing soils contain humus around the roots, which assure that vines get the nutrition to regenerate year after year.

What are some of the major wine soil types in the world?

Limestone is one of the most exalted soil types in all of viticulture and has long been regarded as one of the best raw materials for nurturing vines. Limestone soils, specifically decomposed limestone soils (limestone itself is too hard for roots’ to break into) are rich in calcium carbonate. This calcium carbonate content is extremely beneficial for vines. First, it offers insane water retention capabilities while simultaneously permitting excellent drainage. Secondly, calcium rich limestone soils tend to have a higher pH than other soils, which translates to easier nutrient absorption and higher acidity levels in fruit. Third, the high calcium content in limestone also helps berries fight off diseases. When calcium content in soils is low, grapes begin to prioritize their inner health rather than skin health, which in turn, makes clusters more susceptible to disease and rot.

All of this to say, fruit grown in limestone soils generally has bright acidity and solid structure, which then lead to wines of serious ageworthy potential (hello, Burgundy!) Chalk, the dominant soil type in Champagne, is also a type of limestone.

Sandy soils are exactly what you imagine them to be. Characterized by tiny particles, these well-draining soils are ideal for vines grown in wet climates. Wines produced from fruit grown in sandy soils tend to be delicate and elegant (think Nebbiolo in Barolo and Grenache in the Southern Rhône.) Some of our favorite producers cultivating Grenache on granite/decomposed granite soils include Chateau Rayas (Southern Rhône) and Comando G (Sierra de Gredos in Castilla y León.) A benefit of sandy soils is that phylloxera cannot survive in them, meaning that some of the world’s oldest vines are rooted into sand.

Clay soils are known for their serious retention capabilities (both for nutrients and water.) Many experts deem that wines produced from fruit grown in clay soils lead to big, boisterous, and round final wines. The Right Bank of Bordeaux (think Pomerol and Saint-Emilion) are known for their clay-heavy soils. These soils are excellent for grape varieties that need less hang time on the vines, like Merlot.

Gravel-based soils (like sand) refers to the texture of the particles in the dirt. Gravelly soils are made up of rocky material, sized from quarter-sized pebbles to clunky stones. These particular types of rocks, no matter the size, retain heat and reflect them back to vines at night, allowing fruit to optimally mature. Because of this, wines from these soils tend to be bold and higher in alcohol. The vineyards located on Bordeaux’s renowned Left Bank are prime examples of gravelly growing sites.

Loam, like sand and gravel, is also a soil type defined by texture. Loam soils are generally crumbly and are often made up of silt and clay. When conditions are just right, loam soils provide an excellent home for vines and create concentrated fruit that leads to big-boned wines. However, sometimes loam soils can be too fertile, which lead to over-vigorous vines and flabby final wines. Santa Barbara is one of the most popular and top-quality viticultural sites for loamy soils.

Slate is similar to schist in that the two are both metamorphic rocks formed under heat and pressure. Slate comes in a variety of colors and absorbs heat, which is beneficial in cooler climate regions. Fruit grown in slate soils tends to create highly aromatic wines marked by flinty notes. Germany’s Mosel region is regarded for its heat-retaining blue and red slate soils.

Schist soils are comprised of hard, dense rocks that are layered with minerals. These soils are generally flaky, retain heat well, and create some of the world’s biggest and boldest reds. Portugal’s Douro Valley and Priorat are two major regions that are regarded for their schist soils. According to accomplished geologist and professor Alex Maltman, the difference between these two rocks is determined by ‘planar aspect.’ If individual minerals that comprise the rock are not visible but the splits along their secondary planes are distinct, the rock is called slate; if the minerals that comprise the rock are visible and less-marked by a clean split, the rock is called schist.

Granite is a soil type composed of cooled quartz and magma. It is found all over the world and comes in a variety of textures and compositions. Granite tends to have a high pH level and rather porous make-up, which creates high-acid fruit and allows vines to dig deep into the earth. The Northern Rhône is home to some of the wine world’s most highly-regarded granite soils. Though it’s not just Syrah that loves granite! Gamay and Mencia are two of our other favorite grape varieties that thrive in granite soils.

The overarching term ‘volcanic’ soils refers to igneous soils that are produced from cooled and hardened magma, formed intrusively or extrusively. One of the most well-known components of volcanic soil is basalt, which is made from extrusively cooled and hardened lava. These fine-grained soils are well-draining, hold water, and generally have high contents of iron. When it comes to identifying volcanic wine regions, think islands: Sicily, Santorini, and the Canary Islands are a few of the more popular regions. In addition, much of Italy (Soave, Taurasi, etc.) Washington State, and Hungary are also comprised of volcanic soils. 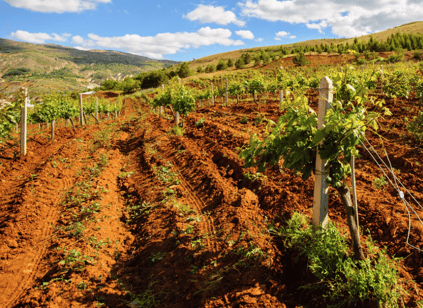 The long-debated concept of ‘minerality’ has driven wine tasters in circles for decades. It’s important to know that there is zero scientific proof that vines directly take up ‘minerals’ in the soil to lead to ‘minerality-driven’ flavors. Generally, these ‘mineral’ flavors (notes of wet stone, flint, and gunsmoke) are more likely to come from vinification processes and winemaking techniques.

However, that is absolutely not to say that wines’ flavor profiles are not influenced from the soils in which they come. This is 100% true, however, ‘minerality’ in wine is not attributed to vines soaking up minerals through their roots. Moreover, although soil plays a massive role in the flavor profile of a final wine and the overall concept of terroir, a handful of other factors-- including climate, topography, elevation, aspect, and more-- contribute to the end result, too.