Looking to sip in style? Jermaine Stone’s got the right idea. Whether chatting wine and hip hop on his podcast or simply sipping at home, Stone swears by Zalto glassware, good music, and even better wine. Get to know one of our savviest friends through our exclusive interview, here.

Where are you from: The Bronx, NY

Where do you currently live: Brooklyn, NY

How did you first get into wine? I got into wine accidentally. I took a job at a wine auction house warehouse during college-- I didn’t think that I would end up loving it. I thought I’d quit the first week! Working in a warehouse is hard. It’s backbreaking labor. But about a month passed and it all was second nature. I started learning about wine and the rest was history.

What was your first job in the industry? After that, I was a shipping clerk in a wine auction house (Zachy’s) and continued to grow with the company. From there, my position changed. I went from shipping clerk to office administrator, then to the logistics supervisor and onto logistics manager. That was over a period of nine and a half years.

What was a wine that changed your life and why? A 1998 Leflaive at a BYOB that we had with some auction clients. At that point, I'd already been in the wine industry for about seven years, and I liked wine but didn't love it. I remember tasting this wine and saying to myself “Holy shit, I didn’t know grapes could do that!” It was so good.

How did you get into the auction world? Honestly, I thought that I was going to work for a liquor warehouse. Ha! A friend of mine was hired there the day before and he knew I was looking for a job, so he basically asked me if I wanted to come through and I said OK. I went that same day and was super aggressive. Luckily, I got an interview that day and they hired me. 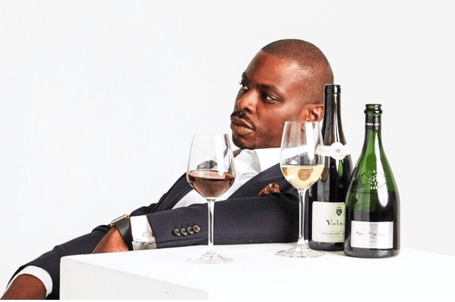 How did this transition into auctioneering? As an office administrator, one of my jobs was to attend the auctions. I was a standing clerk next to the live auctioneer-- basically, I was a wine auction stenographer. Everything that happened in the room needed to be recorded, and it was also my job to make sure the auctioneer stayed on track, didn’t miss any bids in the room, etc.

I stood next to some of THE best wine auctioneers in the world for almost a decade, just standing and soaking it all in, and in my last year there, they asked me to give auctioneering a shot. I was very, very scared, I didn't want to do it. I didn’t think it was for me, I didn't see any auctioneers that looked like me, and the pronunciations alone were really intimidating! I didn't want to do it at first. But then they kind of pushed me again and I did. The first time I went up, I was horrible! I was really discouraged, then a friend of mine was like, look, just treat it like you're up on stage rapping. After that, I was a good auctioneer.

What do you love most about being an auctioneer? The interaction with the crowd. Poking fun and acting goofy with people is accepted. Nobody really WANTS to be there (ha), so I’m like, the guy at a party talking a whole bunch of shit, directing the conversation. But at the same time, you're managing really high dollar transactions! That in itself is a lot fun.

Tell us a bit about your company, Cru Luv Selections. Cru Luv Selections is a consulting firm that’s dedicated to blending wine and hip hop. We do this through importing, consulting, marketing, and product sourcing, but we also offer several media outlets. We create content geared around wine and hip hop; we have four shows. We also curate wine and hip hop events. One of the podcasts we have, The Original Wine and Hip Hop Show, is where we bring a guest on, either a wine or hip hop influencer, and we ask them to pick a wine or song (respectively) that’s special to them. Then, I select the pairing. We talk about our choices over the course of the show. Basically, you're seeing an influencer you like in a different light.

But also, we’re just taking a different approach to wine culture overall. We talk about seasonal circumstances, 'adulting,' cuffing season, new relationships, etc-- basically, how do these circumstances affect your wine life? How can I improve your wine life in all of those areas? We focus on the practicality of wine and not the education.

What are some charity initiatives that you support through your auction work? I love Wine on Wheels. I’ve always had a lot of fun with them. We’re currently working on something with Urban Connoisseurs, too. They’re based out of Seattle and are focused on getting the urban community into wine by hosting free trips, paying for WSET certifications, and organizing other wine-focused initiatives to help minority communities. 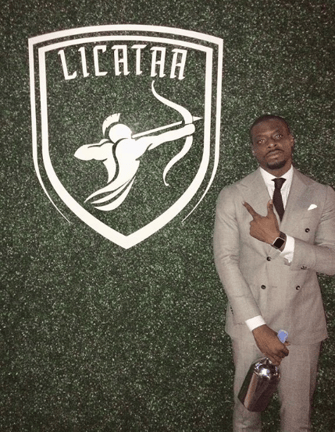 When did you start your podcast, The Original Wine & Hip Hop Podcast? I started it in 2016 and it was originally called Taste the World. Wine and Hip Hop was always ‘Taste the World,’ but with that name, I realized I wasn’t being true to myself. I thought wine and hip hop would put me in a corner and I wanted to appeal to the whole wine world. Originally, it hosted two influencers at once, one from the wine world and one from the hip hop world. The show had a lot of potential, but it didn't hit what I was hoping to, because we were introducing two people that had never met, so it was always kind of awkward. I decided to change it to a one guest format and focus strictly on hip hop.

What is the concept behind The Original Wine & Hip Hop Podcast? On each episode, I invite an influencer from the wine or hip hop world and I ask them to pick a song or a bottle of wine that’s special to them and I pick a pairing for what they bring to the table, and on the episode, we talk about why we chose what we chose. It hits a few different ways because you can walk away learning something about wine, hip hop, or both. Just out of my regular circle of friends, I have many that know a lot about one or the other, and I’m always the common denominator. So having these conversations and helping people to see the true face of the wine and hip hop industries is what I’m trying to do. As a culture, we don't see each other right now, and it creates a lot of divide. Wine is a great opportunity to create a common ground. If you're not in it, you are interested in it, and if you're interested in it, you want to tell people about it. 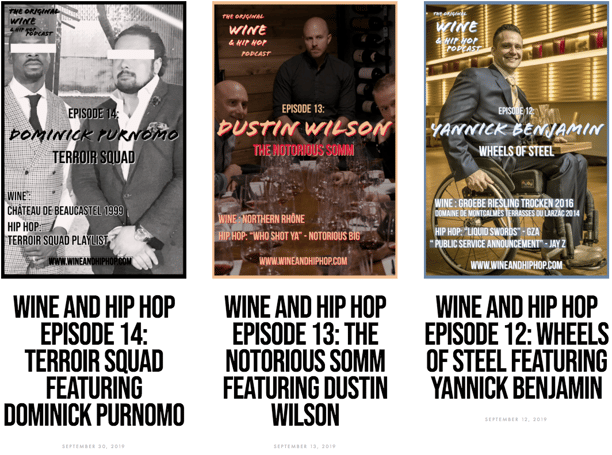 What mark do you hope to leave on the industry through The Original Wine & Hip Hop Podcast? I always tell people I want to change the wine industry all the way from the chateaux to the streets. On its top level, I want there to be a common ground for everyone. That is the true face of the wine industry. You look at a guy like Dustin who is not pretentious at all, and most people that I deal with are not pretentious, but wine has this negative association with that, like everyone’s stuffy and snobby. That’s not true.

At the same time, you wouldn't expect rappers to have the level of appreciation for wine that they do, especially when they're getting new bottles introduced to them. I sat with Manolo Rose the other day, he’s from the Marcy projects and is a rapper, a real street guy. He was so taken by wine because of how I was able to introduce it to him. I was speaking his language. So with the podcast, I think that I’ll be able to introduce wine culture to a lot of new people just by speaking their language. I can also bring wine people and people not as familiar with hip hop into that sphere and make them comfortable. It’s amazing to create a common ground

How do you find that the worlds of wine and hip hop collide? I think that both are full of hustlers. Honestly, the three tier system is very similar to how the streets work: your wine shop is like a block, a ‘spot’, thats where people are going to be. But it’s not just that-- there’s a certain passion that lies behind both wine and music. Most sommeliers are great writers because of the metaphors they use to describe wines that they’re tasting. How do you describe smell? You have to compare it to something. A metaphor is usually the easiest way to transfer information, and that's how rappers translate emotions, too.

Who are some of your biggest wine industry inspirations? Andre Mack for sure, Don Zacharia, and Michael Jessen

Who are some of your biggest music industry inspirations? Jay-Z, Ice Cube, Master P… Canibus deserves some props, too! And Big L.

What can we expect next from Jermaine Stone? Lots of shows! We have four shows this month which will be interesting. We just put out our first non-wine podcast. Then, we have Wine and Hip Hop TV, The Original Wine and Hip Hop Podcast, etc. The TV component is simply turning our audio show into a visual show. We also have lots of events coming up, including Wine Avengers (it’s a collaboration between me and some wine media people. We’re offering the black perspective on wine. Check it out!)